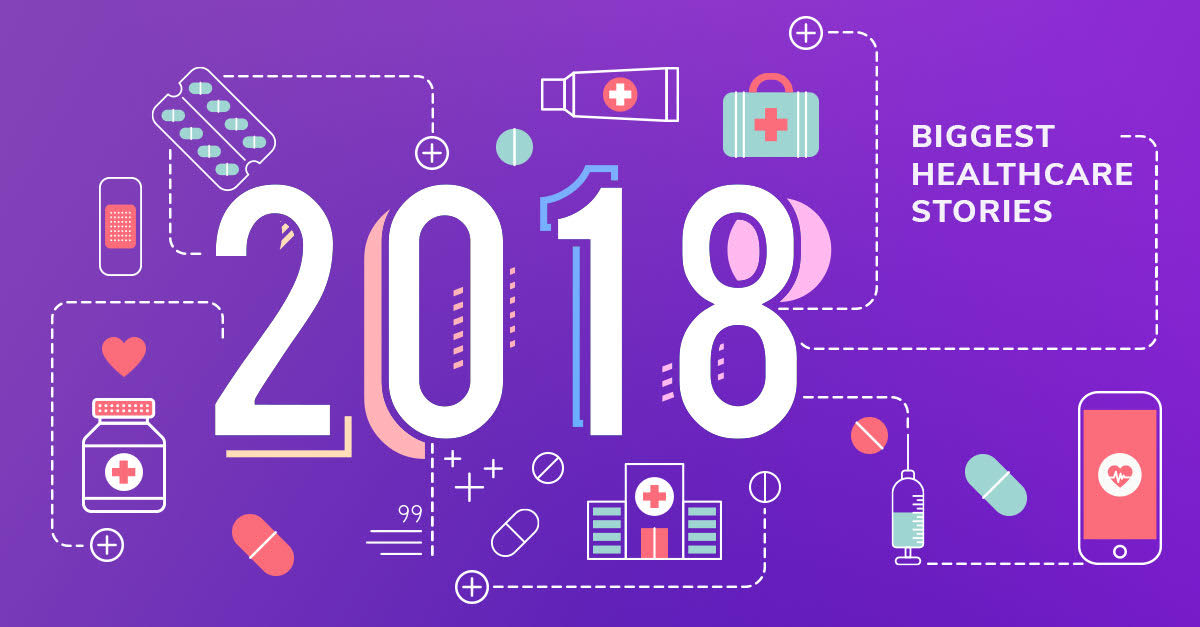 Bold, exciting, and groundbreaking, are only some of the adjectives that can be used to describe the news that governed the healthcare sector in 2018. To say the least, 2018 was rife with massive healthcare-information technology and IT mergers, deals, and passing of some major government regulations. And with another year over the horizon, healthcare professionals are preparing themselves to dive into a new year. While 2018 pointed towards the advancement of value-based care, there’s some uncertainty on what 2019 will bring.

But before we get to the future, let’s take a moment to look at some of the stories that were under the spotlight in 2018:

Consolidation in the healthcare sector has accelerated in the past few years, reshaping the way health systems, hospitals, and independent physicians across the country operate. According to Illinois-based Kaufman Hall, mergers and acquisitions involving acute care hospitals have increased by 55% in the last seven years. Much like Dignity Health and Catholic Health, or Ascension and Presence, many health systems are considering financial and strategic mergers or acquisitions.

Be it CVS-Aetna deal or Cigna buying Express Scripts, healthcare organizations are trying to bring something to the table and streamline their operations. A number of reasons such as poor credit outlook, lack of access to capital, and the fact that technology and value-based investments are significant now, suggest that consolidation is likely to continue. Although a major question around consolidation remains: whether it would lead to better care delivery and reduced costs. Consolidation activities may help scale their operations and manage patient health in a better way, but loose affiliations could go wrong. A major question which may find answers in the coming years is whether consolidation would lead to a better care delivery and reduced costs?

One of the biggest news of 2018 was the joint venture formed by Amazon, Berkshire Hathaway, and JPMorgan Chase. Another, big news was the appointment of Dr. Atul Gawande to lead this joint venture. Given the state of healthcare and the pace with which companies like Uber, Apple, Google etc., are entering healthcare industry, this venture did not come as a shock.

Each of the companies-Amazon, Berkshire Hathaway, and JPMorgan Chase come to the table with a different ability- groundbreaking innovation, consumer-focused approach, or the ability to handle data at a tremendous scale. These companies have a proven ability to handle and manage big data which gives them edge over others and that is the key. So possibly, we are looking at some transformative research or tools that will help people manage and access their healthcare data in an efficient and useful manner. Healthcare could do with some innovation.

2018 was a big year for value-based care. According to a report from the Health Care Payment Learning and Action Network, 34% of healthcare payments were tied to value-based care in 2017. This is an increase of no less than 23% over two years.

Additionally, Centers for Medicare and Medicaid Services (CMS) recently finalized an overhaul of the Medicare Shared Savings Program (MSSP), confirming what everyone was expecting: Accountable Care Organisations (ACO) will have to assume downside financial risk. The new ACOs will have only two years to operate without assuming risk, a significant trim from six years under MSSP and three years for new, low-revenue ACOs.

CMS proposed a rule late in December that allows payment adjustments to be made to Medicare Advantage plans in 2020 to reflect the total number of conditions each patient has. This would be in addition to viewing each condition individually in the MA model. The model will add variables that count the number of conditions a beneficiary may have along with certain technical updates that calibrate the model with more recent data.

4. Employers get tired of healthcare costs

It is not just Amazon- it is just one example where employers took charge with an active role. In a survey by National Business Group on Health of 170 companies, it was revealed that employers projected an increase of 5% in their health benefits costs, for the sixth year in a row. This would bring the amount to $14,800 per employee in 2019. Also, companies like GM are looking to sign direct contracts for healthcare or simply invest in primary care themselves, much like Amazon in Seattle.

The survey also found that more companies are working on shifting costs by driving delivery system changes using accountable care organizations, direct contracting, or high-performance networks. There are also significant hopes from Health Transformation Alliance, a co-op of 47 companies including American Express, IBM, and Lincoln Financial. Collectively, these organizations spend more than $25 billion a year to provide coverage to over 6 million lives.

With the HTA, these companies aim to improve employee wellbeing and unite on patient-centric care. In only two years, HTA was able to save its members $800 million in pharmaceutical costs and is now planning to address chronic conditions.

CMS hopes to make the program more flexible and less burdensome, in part by adding “measures that require the exchange of health information between providers and patients, and incentivize providers to make it easier for patients to obtain their medical records electronically,” the announcement states. Specifically, it is replacing six measures with four:

A consumerism-inspired, patient-centric healthcare is going to be prevalent- if not today, then tomorrow. And most likely, it will be an automated, smarter healthcare- where automation will save healthcare over $8 billion. The 2015 CAQH Index shows healthcare needlessly spends more than $8 billion every year on manual work for simple procedures- including mailing checks and claims and contacting patients to verify their health insurance.

Starting off simple, AI-based voice assistants are making great strides in a variety of industries, including healthcare. More than 51 million Americans have a device such as Amazon Alexa or Google Home, and although they use it mostly for simple tasks, the technology has so much potential.

Hospitals and healthcare providers have found that voice assistants can help increase the efficiency of care delivery and improve the patient experience. One promise is that it would reduce the strain on the patient as the AI-assisted voice messages make day-to-day tasks easier. Another reason why voice assistants have been able to make such an impact is their popularity. Apple Siri, Google Home and Assistant, Microsoft Cortana, and Amazon Alexa are closer to household names now. Patients are able to check on their appointments, get reminder for their medications, and have answers to questions such as “can I get a nurse,” “when do I take my medicines?”

The technology may be new, but voice assistants have the possibility to change how patients interact with their care team, and they hold immense promise.

Along with patient safety, financial stability was one of the biggest concerns for hospitals this year. Hospitals are worried about an increase in uncompensated care, which could have drastic impacts on their financial stability. Declining government reimbursements, rising operational costs, and shifting financial risk has made it difficult for providers to generate enough capital to cover overhead costs and grow or sustain care delivery.

With value-based care, healthcare organizations will have to prioritize a number of capital investments both inside and outside a hospital setting to mitigate financial risk. As per Moody’s Investor Service, the operating cash flow would be flat, or worse, decline by up to 1% in the next year. This is compared to the 2%-4% contraction it predicted for 2018, so the outlook toward financial stability still looks dicey.

It’s understandable why healthcare is at risk of data breaches: provider organizations keep records of very valuable information. Additionally, the healthcare sector is widely regarded as having rather weak security. Here are some breaches in healthcare that were recorded by Q2 in 2018, sourced from Becker’s Hospital Review:

With data in healthcare on the rise, organizations must be vigilant and should incorporate some practices that will enable full visibility into how their data is being accessed and used. Data breaches have nothing less than costly consequences on the organization as well as the individual.

While these are nothing short of great, we know that it does not end here. There are so many stones that the healthcare is yet to turn in its transformation. There needs to be an increased focus on making healthcare efficient in terms of how we are delivering the services. The care we deliver to patients has to be more proactive than reactive. The physicians should be provided with better technology to help them not loathe their computers. All in all, focusing on keeping people healthy has to be the priority, and not putting out fires as they come.

Here’s to a new year, hoping we come closer to our goal of providing a healthcare accessible to the people, all the time.

To know more about how you can transform your healthcare in the next year, get a demo.