Healthcare 2016: The Changes and Looking Forward 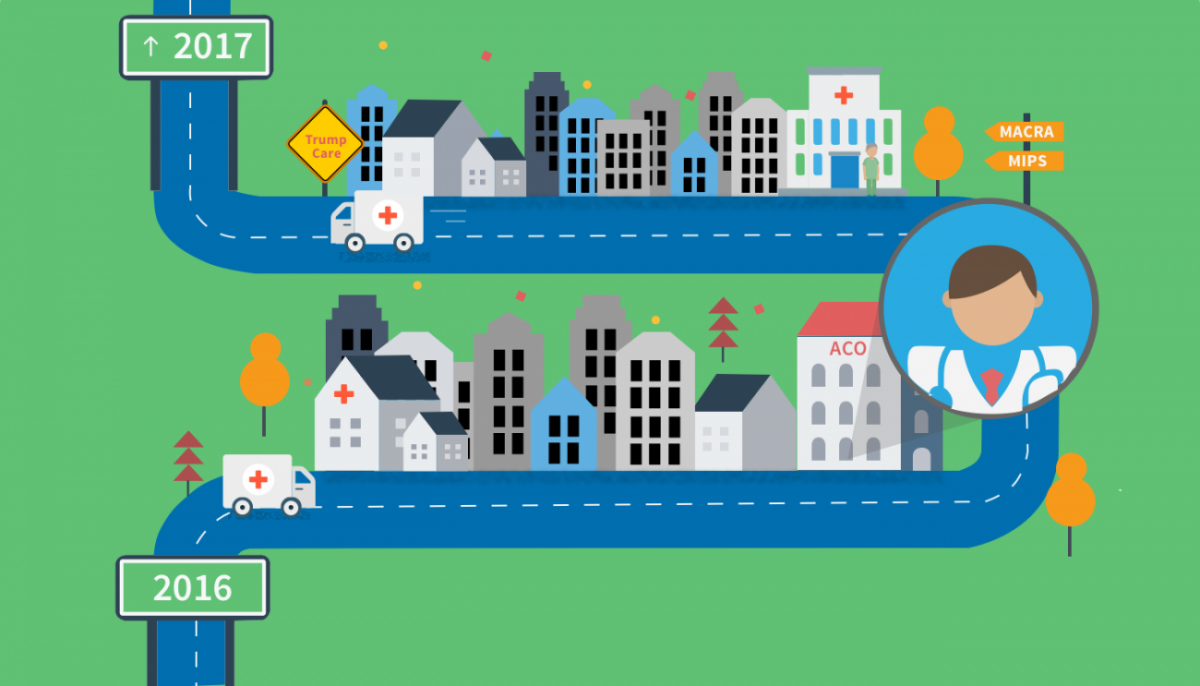 Another year comes to an end and one can say 2016 has been a rollercoaster of a year for the healthcare industry. We saw revolutionary developments, rattling news and understated excitement ruling the system in this year. As 2017 is about to come, let us look back at top 10 things that changed and what to look ahead for in 2017.

A groundbreaking development in US healthcare space – Medicare Access and CHIP Reauthorization Act, also known as MACRA was proposed in 2015,  it was one of the most discussed topics in the entire healthcare industry. It would:

Quality Payment Program will have two payment models – Merit-Based Incentive Payment System (MIPS) and Alternate Payment Models or APMs. MACRA was developed with the idea of making health information flexible, accessible and user-centric, all the while providing the citizens with better health care opportunities.

An elaborate final rule, lasting 2400 pages was released early in October and its implementation will start from 2017, the first performance period for payment adjustments in 2019, giving a window long enough to structure data and claims for analysis to be performed.

ACOs were developed as a step towards value-based reimbursement that aims to improve population health with better care coordination and quality services. A voluntary team of doctors comes together to deliver patient-centric care, and they are reimbursed based on the outcomes they achieve and their success.

CMS has been backing ACOs and constantly releasing rules governing the functioning of ACOs. Early this year, to strengthen incentives for ACOs, CMS proposed changes in MSSP, advocating ACOs to succeed and improve their care delivery. This proposed rule modified the benchmarks used to determine the performance of ACOs, and reflect their performance against providers.

Also, CMS revealed the details of its newest ACO offering:

It is not much different than Track 1 but includes a few elements from Track 3: prospective beneficiary assignment, the option for thresholds for shared savings and losses, and the option to use three-day SNF waiver.

2016 has witnessed major developments in Interoperability, mostly backed by ONC. ONC has greatly emphasized the need for interoperability in its report to Congress with the development of Health IT, and not long ago, released its Interoperability Standards Advisory for 2017, summarizing the essential standards and the specification needed to implement them to facilitate the sharing of clinical data.

Health IT played a pivotal role this year, and according to a report published towards the end of this year,

Comprehensive Primary Care Plus, or CPC+ is an initiative by CMS, tagged as an optimal use of health IT as a risk-based payment model. CPC+ is planned up to five years and will kick off in January 2017, giving up-front incentive payments to physicians participating under either of the two tracks: Track 1 or Track 2. These tracks would be

CPC+ has been apprehended as a strong bond between technology and healthcare, with physicians driving the advancements. It will be implemented after CPC ends this year, which was three year initiative.

Precision Medicine Initiative and Cancer Moonshot were initiatives undertaken by the Obama Administration with $55 million, and the worth of precision medicine is estimated to reach $87.79 billion by 2023. The growth in precision medicines, inclusive of predictive analysis and genome sequencing is accredited to the development of new technologies, large-scale biological databases, effective patient characterization and efficient data analytics. Precision medicines have expanded beyond cancer treatments and are now enabling providers to have a better understanding of disease mechanisms and risk assessment.

Currently, precision medicine in the U.S. account for over 65% of the entire North American share and is estimated to grow, backed by government-funded initiatives under the new Trump administration.

Amidst many speculations, Republican Donald Trump was elected as the new President of the United States, and Trump presented the outlines of his healthcare plan, termed as “Healthcare Reform to Make America Great Again,” or Trumpcare. The key facets of Trumpcare are:

The 21st Century Cures Act was passed not long ago, and is termed as the largest healthcare-focused legislative bill since the ACA and contains $6.3 billion in provisions to fund diagnostic tools and therapies. The key features of the 21st Century Act are:

Blockchain has been rendered one of the most significant and radical developments in healthcare which has the potential to solve major interoperability challenges. It’s an online database, containing data about online transactions and was the foundation of ‘Bitcoin’ – the digital currency. This record can be accessed by a network of users, sharing encrypted transactions and is being used majorly in the financial industry. As for the healthcare industry, qit offers interoperability since all the users would be connected to a network and the information being shared would be verified and encrypted. ONC and other major players in the healthcare industry have already termed it as the next big thing in healthcare innovation which could be expanded to data security, health information exchange, population health, patient engagement, and whatnot.

Healthcare industry is the most important sector, and has witnessed several changes and advancements over the course of time. Every step has been nothing less than a milestone and a revolution in itself. The last year, 2016 was one of the many important phases that build and fabricated the face of healthcare. These 10 things are just a few of the many that made heads turn – from the utilization of information to care delivery. It is all but time for us to sit on the edge and look ahead to what does 2017 have in store for us?