Physician Needs and How should Health IT help? 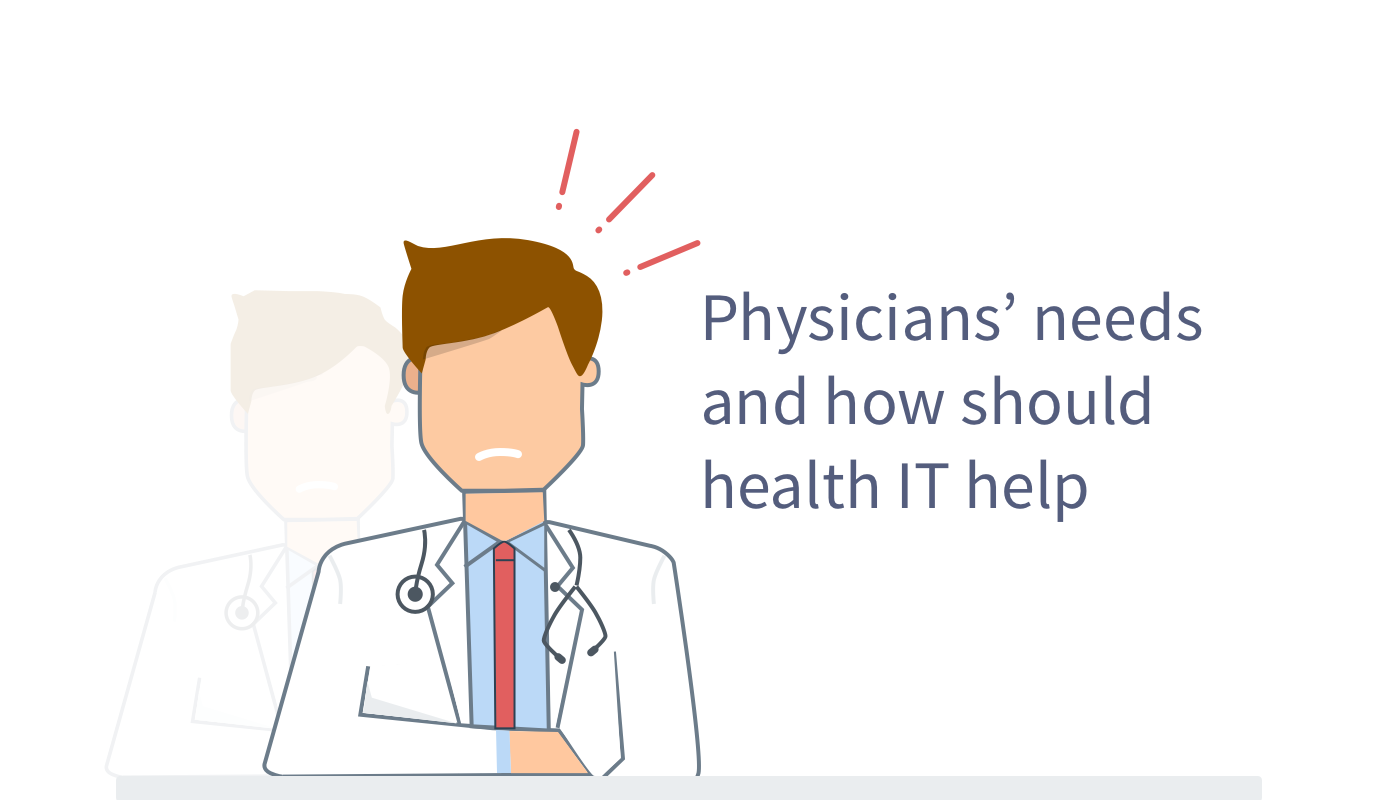 Physicians have been instrumental to the healthcare industry; and from their perspective, healthcare is changing rapidly. With several new legislations and continued technological developments might have confused providers. The transition to value-based care is a significant one for healthcare, and cannot be achieved successfully if physicians face such issues.

1. EHRs: Have they delivered what we needed?

True, the healthcare system has lots of inefficiencies and shortcomings, and EHRs were developed to counter them. But believe it or not, a lot of these inefficiencies have stemmed out of EHRs itself. Technology changes in a blink of the eye and leaves doctors to adapt to them. A survey conducted by the American Medical Association revealed that only 34% of doctors were absolutely happy with their electronic systems. The amount of time and money physicians spend to enter the data in their EHRs, keep track of the new quality measures and tracking them totals up to $15.4 billion a year. Here’s what physicians think about EHRs:

Physicians are falling short on manpower, and are constantly asked to achieve more with less. When an employee leaves, more often than not, the work is being shifted to fellow employees. This frequent shifting of work is a major reason behind physician burnout – 54.4% of all physicians in the U.S. have at least one symptom of burnout, and their satisfaction has dropped from 48.5% to 40.9%.

There’s only so many times work can be shifted and the constant downsizing of leaderships coupled with changes in the delivery system, moving toward value-based care and burnout, physicians either retire early and more than half consider changing their career.

3. Changes in the delivery system

With the implementation of MACRA and 2017 being the first performance year for MIPS, the healthcare industry is lined up for substantial changes. Along the way came bundled payments and MSSP ACOs. Moving from fee-for-service to value-based care was a much-needed initiative, and physicians agree with it, but many of them are still unaware – nearly 46% of Primary Care Physicians were not aware that they could be reimbursed for even non-face-to-face time with chronic patients.

Above all, changing the mindset of an entire organization is a difficult task in itself. With so many changes coming up every day, physicians find it difficult to balance their practice with the modifications. Secondly, traditional fee-for-service is still in use. To bring about a complete change, physicians have to be on board and made aware to keep up with this changing delivery system.

Healthcare costs in the U.S. are skyrocketing – in 2015, the total U.S. healthcare spending shot up by 5.8%, reaching $3.2 trillion. In other words, $9,990 per person. With costs increasing in leaps and bounds, physicians have no other option than to search for low-cost alternatives, looking to cut down on overhead costs and finding efficient processes. While managing waste spending is a step that should be undertaken, providers do face some challenges:

Ensuring quality has always been a priority for healthcare providers, and rightly so. The problem arises when it comes to standardizing metrics and reporting them. There is a lack of a common, standard definition, although each point to delivering quality care to patients. Quality reporting is an undertaking no physician would disagree with, but they are met with several challenges:

How should Health IT help?

With a sizeable amount of data scattered all over the healthcare industry, hospitals have to be geared up and well-acquainted with health monitoring technologies on a daily basis. Physicians need to realize that technology is here to help them, and not take their accountability away. It now falls on health informatics to bridge the gap between physicians and technology.

If we are aiming for a perfect healthcare, one where we see patients get the best, then it is of paramount importance that physicians understand the technology easily. A scenario where physician spends 99% of their time with their patients and the rest of it is spent on an intuitive communication with technology. It should support the objective of the industry well and definitely not seem like an add-on job to a physician! Rather a short and crisp activity helping deliver better data driven outcomes.