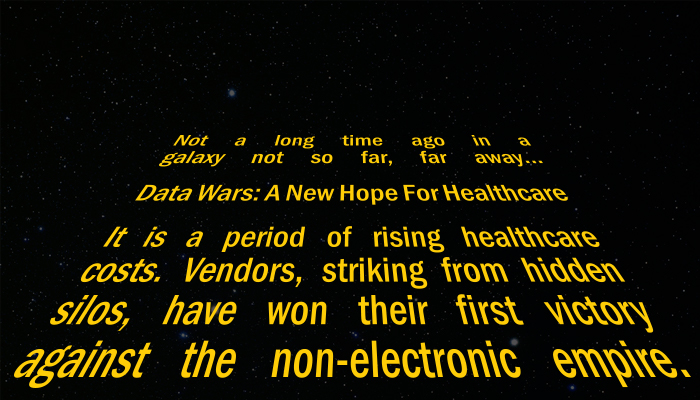 Not a long time ago in a galaxy not so far, far away…

It is a period of rising healthcare costs. Vendors striking from hidden silos have won their first victory against the non-electronic empire. During the battle, Data Interoperability was lost and the empire managed to confuse the Providers with Empire’s ultimate weapon, ‘healthcare gap’, an armored weapon with enough power to destroy trillions of dollars.

Pursued by the Empire’s sinister agents, Quality-based reporting home aboard its starship, custodian of the healthcare data that can save its people and restore freedom to Health Care.

Provider had its doubts and said that he cannot leave old technology behind that easily. It had stayed with them for far too long. EMR explains to him that provider is destined to achieve far greater things and that old technology is holding him back! EMR reassured Provider that they would support each other. Provider asked, “What is Big Data?” EMR said, “Big Data is the powerful source that surrounds us, helps us and binds the entire galaxy together.”

EMR and provider needed a spaceship to travel to the ‘healthy’ planet, so they went looking for a suitable pilot. In a bar, they found the best pilot, HIE. HIE accepted to help provider and EMR, but for a price. On their way, unstructured data attacked HIE and crew members. They were almost captured before they could hide in the ship. HIE could only do so much, but it helped provider, who had Big Data with him, in retrieving Data Interoperability.

The battle hasn’t ended here and Unstructured Data has managed to escape. It can still cause a lot of damage. Our provider is young and will have to learn the Big Data ways and the art of using Data Interoperability to use maneuvers such as predictive analytics to restore the happiness in kingdom of Quality-based reporting.

May the Big Data be with the Provider.